The Many Benefits of Goat's Rue

What is Goat’s Rue?

Also known as French lilac for its similar spikes of white or lavender flowers, goat’s rue is often confused with its distant cousin, common rue (Ruta graveolens), though the two plants belong to distinctly different families. Goat’s rue acquired its Latin name from the Greek “gala aigos,” meaning goat’s milk, because it was believed to stimulate the production of breast milk in goats. The hardy perennial is native to the Caucasus Mountains of the Middle East but is now found throughout most temperate regions of the world, including the Americas, Europe and New Zealand. Reaching about 4 feet in height, this herb features slender, bright green leaves and flowers that take an inverted bell shape and bloom all summer1.

How does Goat’s Rue work?

Goat’s rue contains two alkaloids called galegine and guanidine that have been studied in clinical trials and found to decrease both blood sugar levels and insulin resistance. These findings led to the discovery of an antidiabetic drug called metformin, marketed under the name Glucophage, that is commonly prescribed to manage diabetes2. Other active components of goat’s rue include the antioxidant rutin and the microelements manganese, selenium and chromium. Rutin helps protect the cells of the pancreas from the damage caused by free radicals, while manganese helps insulin do its job while also helping break down body fat and maintain normal body weight. Selenium and chromium help the body regulate glucose levels by repelling pro-oxidants and reducing insulin resistance3.

What are the benefits of Goat’s Rue?

The most obvious benefit of goat’s rue is its role in supporting pancreatic function and maintaining normal blood sugar levels. Though it is not a primary therapeutic treatment for diabetes, long-standing use has shown it can help maintain both healthy glucose levels and healthy body weight, which can avoid the dangerous situation of becoming insulin resistant3. For both humans and domestic pets, goat’s rue can help reduce appetite, burn fat and keep fat from storing in the body, all of which can slow progression toward diabetes4. Goat’s rue has also shown an ability to prevent the formation of nitric oxide in the body, thereby reducing potential inflammation and protecting against the oxidative damage from free radical production3. 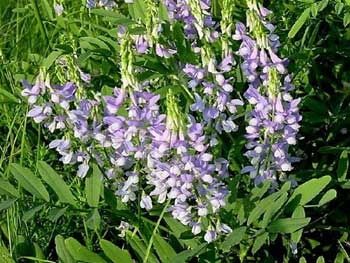