Though perhaps commonly considered a weed today, the milk thistle has a rather regal lineage. The thistle has been the national emblem of Scotland since the 13th century and remains the official emblem of the venerable Encyclopedia Britannica. Charles Darwin may have been referring to the milk thistle in his report of a “giant thistle of Pampas” in his early 20th century book, “The Voyage of the Beagle.” Literary links aside, milk thistle has long been an important source of holistic medicine: As far back as the first century A.D., medieval writers recorded its use to treat a myriad of conditions, from baldness to vertigo to the plague. It remains one of the most popular herbal supplements used today to support a healthy liver.

What Is Milk Thistle?

Milk thistle is a member of the Asteraceae family — cousin to the artichoke — characterized by spikey leaves and reddish-purple flowers that turn to puffy white seed clouds to disperse on the wind for propagation. The perennial is found throughout the world and may be known as blessed milk thistle, Mary thistle, Saint Mary’s thistle or Scotch thistle. The idea of milk in most of its names comes from the presence of milky white veins on the shiny, pale leaves. One legend claims that a drop of the Blessed Virgin Mary’s breastmilk caused the white lines4.

How does Milk Thistle work?

A group of plant compounds that are collectively known as silymarin makes up the main active ingredient in milk thistle. Silymarin is a flavonoid, meaning it has anti-inflammatory and antioxidant properties2. Researchers believe the silymarin extracted from milk thistle can have a beneficial effect on the liver, whose primary job is to help the body metabolize toxins. This metabolic work produces free radicals that damage the liver by inflaming it. The natural anti-inflammatory properties of silymarin can help counter this side effect of alcohol-related and fatty liver disease, hepatitis and poisoning from substances like death cap mushrooms4.

What are the benefits of Milk Thistle?

The anti-inflammatory properties of milk thistle can be helpful in ameliorating many conditions, from liver disease to declining brain function to acne. One limited study also reported that ingesting milk thistle helped nursing mothers produce higher volumes of breast milk. Other research indicates a link between milk thistle and lower blood sugar, suggesting silymarin may complement other diabetes treatments and might even reduce diabetic complications like kidney disease4.

The data is limited and research on the health benefits of milk thistle is ongoing, but the plant is considered generally safe in appropriate doses, outside of the risk of an allergic reaction, usually highest among those with allergies to other plants in the same family, like chrysanthemums, ragweed and marigolds2. 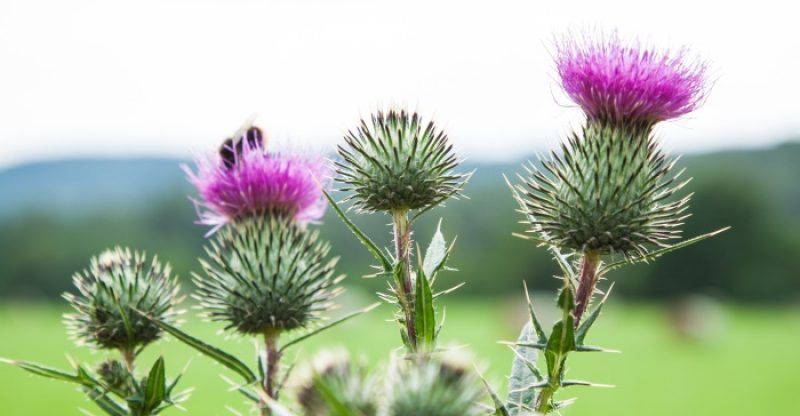