Help for cats and dogs to help relieve esophagitis caused by gastric and acid reflux. 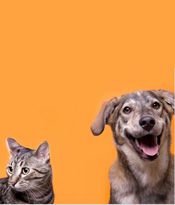 Esophagitis is a condition that describes the irritation and inflammation of the esophagus (the tube that leads from the back of the mouth to the stomach) as a result of a continual backup of gastric and intestinal fluid into the esophagus.

This fluid consists of acid, and if left untreated can lead to swallowing difficulties, bleeding and ulceration of the esophagus. It causes severe discomfort and is often quite painful for your pet. Esophagitis occurs in both dogs and cats, although younger animals that have a congenital hiatal hernia tend to be more susceptible.

This condition occurs as a result of excessive vomiting, swallowing caustic or chemical substances, general anesthesia, and suffering from a hiatal hernia, cancer of the esophagus or the reflux of gastric or intestinal juices. Common symptoms and signs that you should be on the lookout for include salivation, reduced appetite, persistent gulping, coughing, regurgitation, swallowing difficulties and anorexia.

Your vet’s diagnosis will be based on the symptoms presented as well as a thorough physical examination. Certain tests such as a complete blood count, biochemical profile, chest x-ray, and urinalysis may be performed. In addition, further tests such as an esophagram, fluoroscopy or esophagoscopy may also be ordered to confirm the diagnosis of esophagitis.

Treatment involves a change in diet – feeding your pet small low-fat, low-protein meals several times throughout the day. Your vet may prescribe medications such as gastric acid inhibitors or antibiotics to soothe and protect the lining of the esophagus. More severe cases of esophagitis may require hospitalization where intravenous feeding or surgery may be performed.

There are certain preventative measures that can be taken
to reduce episodes of esophagitis and these include: